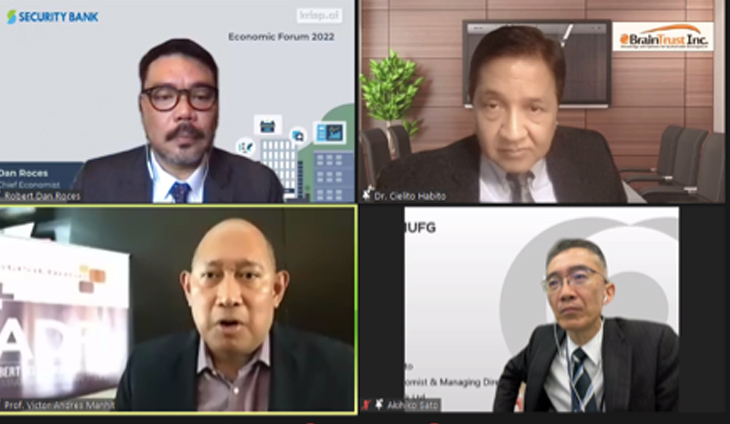 Economists and analysts shared their outlook on the local and global economy, against a backdrop of the Russia-Ukraine war, the COVID-19 aftermath, and the upcoming 2022 Philippine national elections during a virtual forum organized by Security Bank Corp. headed by bankero Sanjiv Vohra.

Victor Andres Manhit, founder and managing director of the Stratbase Group, discussed the dynamics of the 2022 national election campaigns, the profile of the Filipino voter, considerations in selecting a presidential candidate, and how social media has changed the way campaigns work.

Manhit highlighted how the economy in the next six months will be determined based on who wins and who will sit on the cabinet, citing that once the elected president gives their first State of the Nation Address, the economy will move based on the statements made.

“Social media is shaping the discourse; mainstream media is catching up. If the presidency is shaped by what is happening on social media, then imagine what governance would be and that for me is the great challenge,” Manhit said.

Brain Trust Inc, chairman Cielito Habito talked about how to move the local economy forward despite the fallouts from the COVID-19 aftermath and the Russia-Ukraine conflict.

“The economic fallout from the Russia-Ukraine crisis is very minimal, the effect however will come from the indirect impact of the conflict in terms of oil prices and boycotts and sanctions being done by western countries,” Habito said.

Habito, a professor at the Ateneo de Manila University said that two positive streams that could help boost the economy back on its feet include the agricultural and e-commerce sectors.

“Agricultural production has been prevalent across all regions, and the sector has been the biggest provider of jobs for Filipinos. Meanwhile, the digital economy has introduced disruption in the form of improvements in operational processes. We have also seen new products in the market, such as those offered by financial technological companies, which benefit consumers,” Habito added.

MUFG Bank Ltd chief economist and managing director Akihiro Sato discussed how the Russia-Ukraine conflict has made an impact on ASEAN countries and the Philippines.

“One factor that contributes highly to this disruption is China’s zero COVID policy, the lockdowns have contributed greatly to port congestion and production delays, if this continues, we will also see continued disruption on the global supply chain,” Sato said.