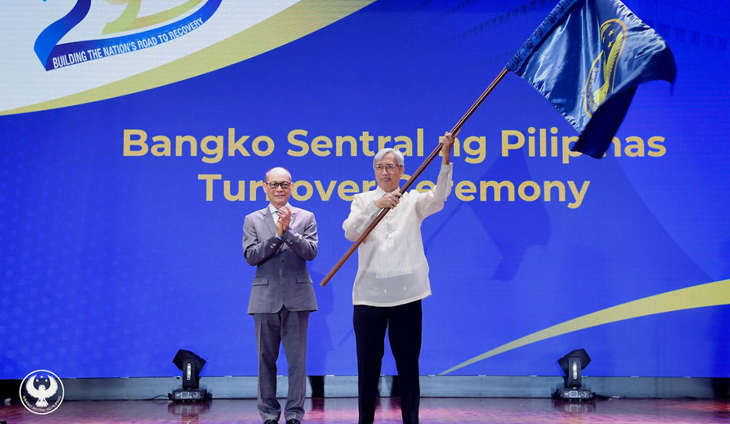 A member of the central bank’s Monetary Board since 2011, Medalla is a seasoned economist and professor whose career in public service spans more than four decades and the administrations of four presidents.

Medalla is the sixth governor of the BSP and will serve the unexpired term of former Governor Diokno.

Diokno said he is confident that new BSP governor will continue the game-changing reforms he has implemented under his previous leadership of the institution, which include ﻿its rapid shift to digitalization and other measures that has kept it ‘agile and innovative’ amid the pandemic-induced crisis and other challenges to the country’s financial system.

Diokno recounted the time of uncertainties at the height of the COVID-19 pandemic when he was BSP governor, and how the institution provided “a sense of confidence and predictability” during this period.

Through these trying times, the BSP ensured the continuity of much-needed financial services and remained sensitive to the needs of its fellow Filipinos by providing financial relief, incentivizing lending, and facilitating access to more financial services.

Even in the midst of a pandemic, Diokno said it has remained business as usual” for banks, money changers, and other BSP-supervised financial institutions.

“We have gone through a crisis like no other, with no emergency response playbook to which we could refer. But we kept our eyes on the ball. We remained agile and innovative. We boosted market confidence. We implemented extraordinary liquidity measures,” Diokno said.

“We have kept a patient hand on our monetary policy levers in the face of rising inflation to allow our economic recovery to gain a stronger foothold,” Diokno said.

Acknowledging his confidence in the new BSP governor, Diokno said he is certain that the central bank’s Digital Payments Transformation Roadmap will make significant strides under Medalla’s leadership.

“I am confident that with the leadership of your new team captain—Governor Medalla—and the Monetary Board, you will continue to deliver game-changing reforms and bring the BSP even closer to the Filipino people,” Diokno added.