Consumer confidence dips in Q2 on faster increase in prices 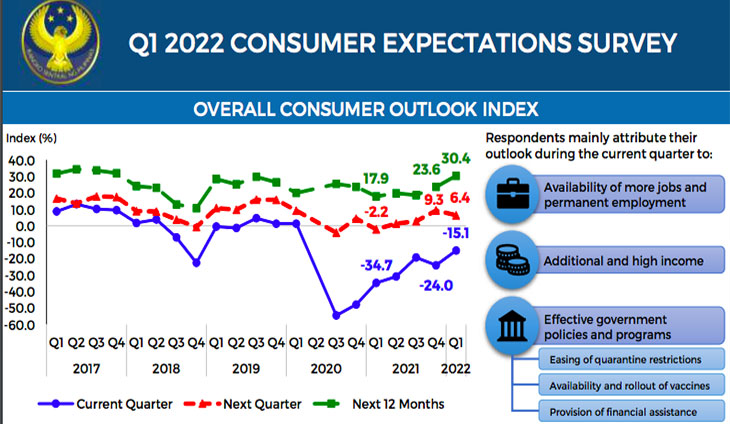 The optimism of Filipino consumers dipped in the second quarter after turning less pessimistic in the first quarter of the year, according to the Bangko Sentral ng Pilipinas (BSP).

Based on the Q1 2022 Consumer Expectations Survey (CES), the overall consumer confidence index slipped to 6.4 percent in the second quarter from the previous quarter’s 9.3 percent.

The central bank said the respondents’ less upbeat sentiment for the second quarter stemmed from their concerns about the faster increase in the prices of goods, low to no increase in income, and high unemployment rate.

Inflation is seen breaching five percent in May after quickening to 4.9 percent in April from four percent in March due to soaring global oil prices and elevated commodity prices due to the impact of the Russia-Ukraine war.

The BSP’s interest rate liftoff started with a 25 basis points rate hike last May 19 to curb rising inflationary pressures and prevent the emergence of second-round effects.

The results of the survey showed consumer sentiment in the country was less pessimistic in the first quarter as the overall confidence index improved to -15.1 percent from -24 percent in the previous quarter due to expectations of availability of more jobs and permanent employment as well as additional and high income.

The respondents of the survey also cited the effective government policies and programs, such as the easing of quarantine restrictions, availability and rollout of vaccines, and provision of financial assistance.

”The higher confidence index, albeit remaining negative, indicated that the number of households with optimistic views increased, but was still lower than those with pessimistic views,” the central bank added.

The strong economic rebound was sustained with the country booking a stronger-than-expected gross domestic product (GDP) growth of 8.3 percent in the first quarter of the year.